In 2011 I participated in Level 5, a performance workshop inspired by the self-actualisation seminars of the 1970s. It ran for 14 hours and was streamed live to a gallery at The Blue Coat in Liverpool as part of the Abandon Normal Devices Festival.

What was fascinating about the experience were the layers of identity involved. As Brody Condon talks about in this video, the interesting thing about this performance was the relationship between a player and their character. So as a character you took part in pscyho-drama exercises where you might end up playing the mother of another fictional character… This really gets you going on ideas of identity and reality. I also noticed that I had concerns for some of the other participants who seemed too vulnerable to cope with this doubling or tripling of roles and identities. 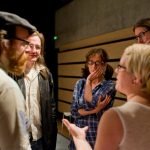