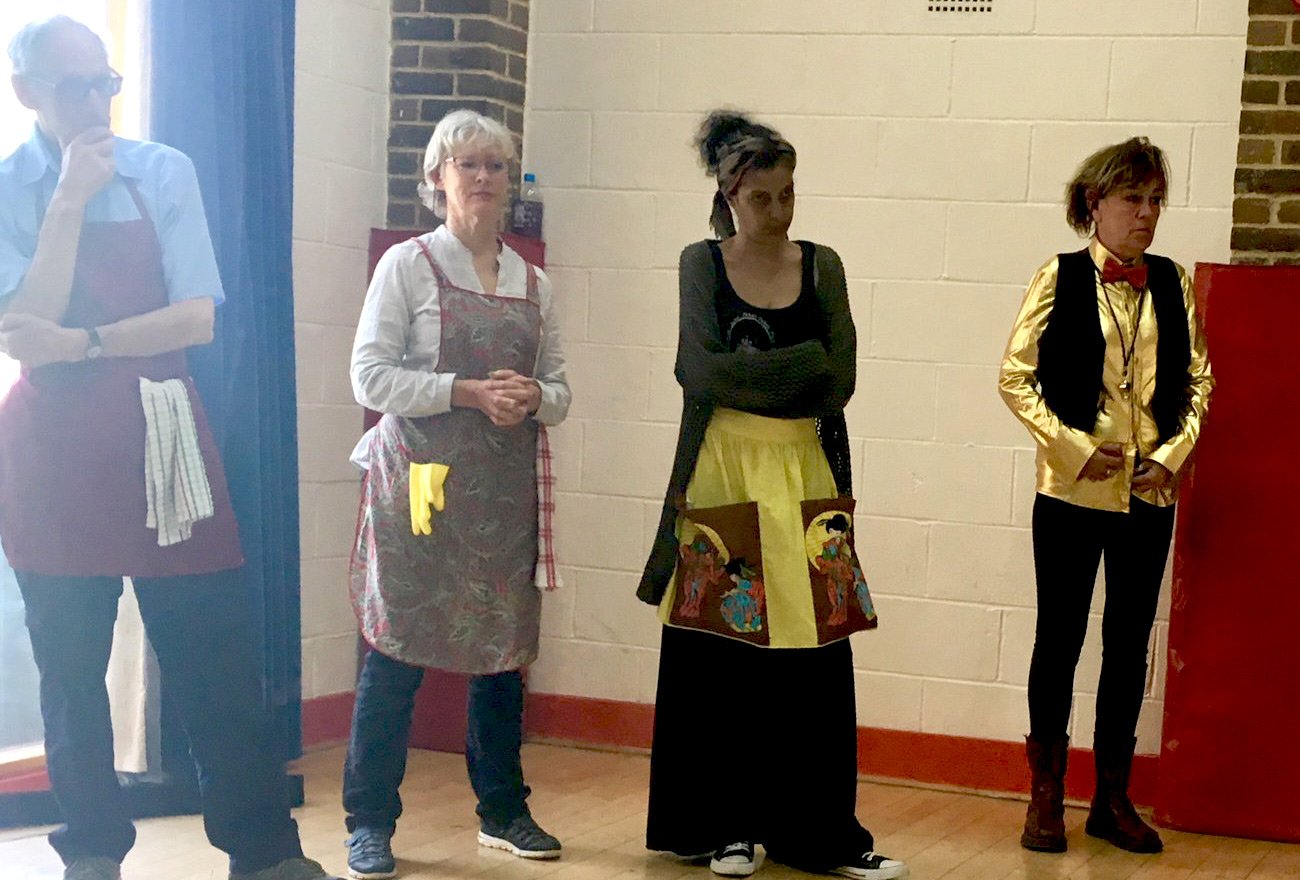 Today we have a guest blog from Julie Orchard, pictured in gold. Its all about her experience of creativity and recovery. Its great. Enjoy.

My experience of “creative recovery “

I know it might sound over the top but creative recovery has given me reason to live. Not just exist.

It began when I had to get sober – alcohol had brought me to my knees as they say.  My life was on self-destruct. I needed help and I got it from the services provided by an organisation called Pavilions, and the AA and other fellowship meetings. These gave me a kick start and I continue to use them and their support. Through the people I met I was introduced to The Cascade Cafe. Fair priced food and the company of people who were there for varying and similar reasons. I went to their open mic nights and New Year’s Eve party and had seen a show put on by United Rocks Recovery at the One Church, which was so entertaining. It was full of all sorts of talent. I remember thinking wow this is amazing – and secretly (even a secret to myself) I wished I could be a part of that. A year and a bit later I had joined Cascades’ writing group, the choir and drama group. The people were all so welcoming and silently understood where I was coming from.

Today I am filled with excitement and inspiration about the days ahead, looking forward to the choir and drama. To be looking forward with a sense of belonging in the now and to the future is a massive change from where I was. Drinking and not drinking, I was in the depth of depression. I was lost, had lost myself, lost interest in things I enjoy. Each day when I woke I just wanted it to be over. I was not motivated and would put one foot in front of the other and get myself to a CBT workshop and/or a meeting. I filled my time, hours, days, weeks, months with these and Netflix, on my quest to giving up alcohol. Time was vast, too much of it. Now, there isn’t enough time in the day for all the things I want to do. After 2 detoxes and more relapses than I ever imagined, I have put together what I call my Recipe of Recovery. The added ingredient of CREATIVITY is totally crucial to my recipe.

First, I want to say how important it was and still is that these people I have joined are in recovery too. Its a given when you attend workshops and meetings. To be able to do something that is not just about working through addiction, but to join an activity where I feel comfortable and ‘’out’’ that I am a recovering addict is essential to me. We don’t always talk about it, it’s just a known amongst us. But always can talk about it, if want to. And the jokes that come out of our mouths are freeing. I really wanted to stress this point and was struggling how to until I was scrolling through Cascade Recovery Cafe Facebook page yesterday and came across this quote that hit this home.

‘’You can’t break the stigma of addiction, until you break the stigma of recovery. By Amy Dresner’’ Being creative is one thing and its brilliant but to be able to do it with others in recovery feels safe; I don’t have to hide this part of me; there is no shame.

And one more quote from that Cascade FB page is

“What a beautiful thing it is, to be able to stand tall and say ‘’I fell apart, and I survived’’. ‘’ I stand so tall after a rehearsal and/or a performance. I have gained such a lot of confidence and self-esteem.

My experience of joining the drama group is being encouraged to have ideas, playing with ideas and creating a drama piece out of them. I love the everyday epic theme. At present it is ‘’The Washing Up’’. In the group workshops I/we are acting out stories and emotions, but I/we are acting. The first time I had to act like I was in an argument I couldn’t do it. I was shaking after, as if I had had an actual argument. Drama helps me observe my feelings and work through them. It helps me process emotions that come from everyday life- interacting and working with others, listening, self-expression, mutual expression, conflicting expressions, being committed to something, feeling vulnerable, shy, mouthy, opinionated, self-conscience, letting go, playing, being in control, loosening control, feeling introverted/too invisible, extroverted/too visible. Different from mindfulness and meditation, which I use to calm my mind, the drama group has opened a channel for my imagination and often obsessive mind.

To do anything like writing or singing or drama before I was on my recovery journey, using this new recipe for my life, I would have had a drink before doing anything for Dutch courage to handle the nerves and loosen the inhibitions, a drink after to handle the come down off the adrenaline high of excitement and a drink in the middle to keep me going.

AA meetings and CBT workshops have given me so many tools and coping strategies for what reasons and triggers to drink are always. Celebrate, Commiserate, whatever… my problem was/is I can’t stop! I have found something in creative recovery that is not just about stopping. It’s about starting. Which is the very essence of Creation.

With all this in my life I basically don’t want to drink. Well that’s not true. I have wanted a drink while I’ve been writing this. Sad but true. To not want to, would require some sort of neurological or spiritual miracle. I can better describe it as; I do still have the urge to drink, just not as often. I don’t believe that voice any more, telling me its a good idea. I pull out every ingredient I have, to not act on it. Being a part of this creative recovery community brought me out of my isolation by giving me a safe space to be me, make connections with people and start living life again. I think of them when I get the urge to drink and think if they can do this, so can I. Being creative makes me feel alive, and helps me stay on this recovery path. I am so thankful that there are groups, projects, people, who give their time and belief towards making this available to me.

Big Thankx to Cascade Creative Recovery and those who fund it !!