Not a Séance @ The Blue Room, Men’s Room Group

I had a marvellous afternoon. The word marvellous was one of the group’s description of the show. We had a much smaller audience than at HMP Styal, three young men and three staff and the room contained a large conference table that we sat round one end of.

Everyone had a reading at the insistence of the young men and you can read my further reflection on my mini-tour of Not a Séance here. Highlights were: one potato bullying another potato and the encroaching of the evil potato which is pictured below.

Some of my favourite pieces of feedback are below:

it was testing the audience, will they take the mick, or take it seriously?

its like a meditation, you get to shut your mind off for a bit.

a bit weird and interesting.

And now the encroaching evil potato. One of the young men thought that the potato with bad energy might be trying to get back into the room, so he thought he would document this in a series of photographs from a worm’s eye perspective. 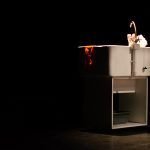