Not a Séance @ The Red Room, Men’s Room Group

This performance was with The Red Room as part of their regular Wednesday evening creative session at The Men’s Room.  As usual the session started with news and a question. The following week’s session was going to be about street art so we were asked to think about what we would do if we could create a piece of street art anywhere in Manchester. After news I had an opportunity to explain what I was doing there and then it was time for cig break. I then with the help of some of the staff set up the room for a cabaret style performance round four tables for an audience of fourteen.

What was interesting about this performance was how I began. In the other two performances I had introduced myself and the performance and then just went ahead and started with a gradual shift in register. This time, the introduction to the performance was before a break, allowing me to have a real separation. I sat myself at my potato table and started feeling the potatoes for energy. As the group returned several of them tried to speak to me or ask questions but I remained focused on my task and non verbally asked for space to continue. Interestingly this was the performance where the group laughed the least, possibly because this beginning created more uncertainty. I think this is better for the performance even though it made me realise how much that I as a performer, and indeed as a human being, (How are these two different? – Discuss) seek the sound of laughter as affirmation.

I have watched a video of the performance and also written in more depth about the experience of all three performances on the mini-tour.

Some feedback highlights are:

it was about what really matters

plants live their own lives

getting in touch with your feelings and making yourself aware

another way of bringing the room together

communicating with a potato

how we attach meaning to objects

the art of suggestion

whose to say it is not true

“What the fuck am I doing here?”

a type of counselling – there are answers in everything and anything

something good about the burying – new growth 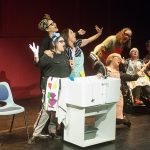 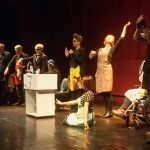 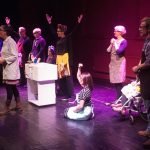 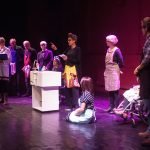 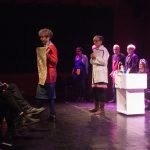 The young men have been exploring Manchester’s cultural life as part of their current creative project and you can see what they have been up to on their tumblr site.