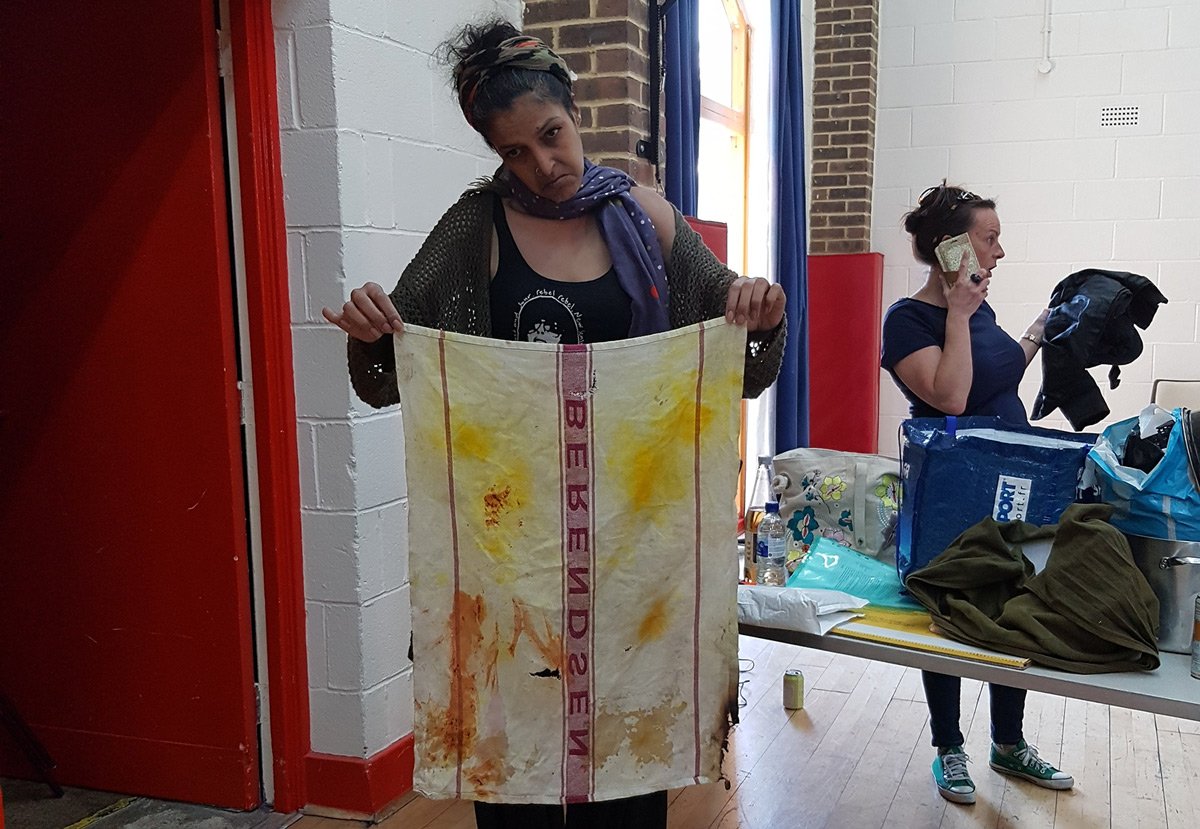 The Washing Up started with a conversation between Nou Ra and Kate McCoy and Nou has written the songs, lots of the written bits and is also performing. She is massively talented and the show would not exist without her. Here is her take on it all.

I have always been a “creative” person.

I started writing poems about ‘crystal caverns’ and ‘faeries’ when I was about 7 or 8, and singing little ditties with suitably childish titles like “We’re the Banana People” and “Unicorns are Rainbows”. I continued writing poems that I never read to anybody and I was a closeted singer, I would sing along to sad songs all throughout my youth. I came out the closet and began to sing in a band in my mid 20’s. I say all that to establish that I am not new to creative projects but Theatre is the latest medium I have worked with and my limited experience of theatre has been very “Serious”. Of the two projects I have been involved in, one discussed addiction and recovery and the other, austerity and its effects on the marginalised members of society. “The Washing Up” project, however, is something I have NO experience of: A Devised Comedy.

Much like social pedagogy, I am still not entirely sure what A Devised Comedy is. (Sorry Robin). It’s a process of creation by collaboration, well at least that’s what I think it is. I am sure that a real theatre person would have a more in depth explanation for you, But ultimately, it was a group of us coming together and really exploring what the washing up means to us and believe me, it goes deep. Everyone has their own opinion, memories and emotions connected to the simple act of washing dishes. We have had real life arguments about how to wash up. what kind of implement to use, and the age old debate of ‘to rinse….or not to rinse’ has left the room divided, no acting required! But it’s those moments that actually make us closer as a company, because the next thing you know we are joking and laughing about the absurdity of it all.

One main thing I have learned during this process is about the physicality of comedy and acting. I wouldn’t call my self an actor (yet) but we have learnt an amazing amount of little tricks that actors use, one of my favourites is a warm up where you pretend your on a motorcycle and end up in fits of hysterical laughter. I can laugh on cue! The other thing that I have only finally begun to understand is why its called a ‘Play’ and why the actors are called ‘Players’, Theatre really is about having fun and acting lessons are really just playtime for adults. Over the last few months we have been blessed to have been taught and guided by guest directors, Tanushka Marah , Alex Cooke, Simon Magnuse and , Becca Manley . Each of them have their own unique styles but the constant is that we will be laughing and having fun within the first 10 minutes. A warm up exercise that is a game, will have us all playing along with carefree abandon like children. It’s a great release, and whatever stress or anxieties you may have in life, you get to forget about them for the time you are in class/workshops/rehearsal. I am actually out of my own head, not ruminating over the worry of the day, for those couple of hours. I really wish I had done this years ago. If you are reading this and have ever thought about joining a local drama group, Do It! Seriously, you can thank me later. You too will learn why I can’t look at The Rock, or Tom Hardy, or any big scary looking actor without imagining them playing like children during warm up games or rolling around on the ground pretending to be a garbage truck or a potato, all actors have done that at some point or another.

However, the main joy I have gotten out of this experience is being able to vent my spleen on how much I hate the washing up and in one scene in particular called “A dirty reminder of the power of the patriarchy” I tackle the arcane and downright disgusting social expectations of ‘the woman should do the dishes’, as I grew up with that as a given in my house, and my bitterness has only grown with me. I hate washing up and by working on a play about it, I have noticed that my partner is finally doing his share. So it’s a win!

The real take away from this experience is that the only limits to art and creativity are the ones we put on ourselves. Under Kate’s supreme tutelage and wise vision we have created a play about the washing up, which is something I never would have thought possible because………well, it sounds ridiculous! But in the world of theatre it seems, anything is possible, and nothing is ridiculous