I spent the evening with my neighbour Steve Johnson who is a very versatile musician. He has had many excellent ideas for sounds and music to be part of Not a Séance and we started work on them last night.

He has been partly inspired by the work of Matthew Herbert, an electronic musician who uses sounds from every day life to create music. His work includes an album called One Pig that documents the 20 week life cycle of a farmed pig.

I brought the chopping board and the variety of peelers and knives that I used for the one-to-one version of Not a Séance and of course a range of potatoes. We concentrated on recording the sounds of potatoes being peeled and chopped and eaten. The scraping of the knife across the board and the peelers tearing the potato flesh were both recognisable and quite haunting. When Steve began to create music with the sounds what I most liked about it was how it echoes the style of the performance, in that at times it was intense and at others really quite funny. At our next session, we will boiling and burying potatoes. 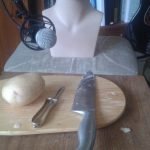 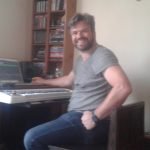 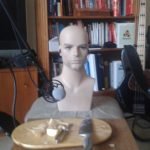 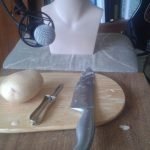 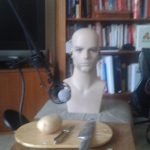